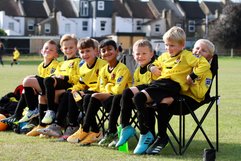 Swanscombe Tigers FC have now twice been awarded by the Kent FA the very prestigious accolade of ‘The FA Charter Standard Club of The Year’ in 2008 and 2016 of which we are very proud, as this is  a reflection of the hard work carried out by the many volunteers who give up their  time for the  club.

Amongst the other previous awards gained by the Club are the Sports Club of the Year Award from Dartford Borough Council and numerous awards from the Kent FA including the KCFA Coach of the Year which several coaches have been awarded by the Kent FA, Terry Uings & Simon Ryan our girls Coach........also to Kevin Matthews our Club Secretary in recognition of over 20 years the Kent FA ...... Awarded to Peter Alloway in recognition volunteer workforce 2016…. Julie Dighton and Phill Uings for service to the Club/Game/Volunteer Workforce in previous years.

On the pitch we have been very successful winning numerous trophies over the years,  this continued last season with the club competing in 6 cup finals and winning 3  as well as having  4 League Champions and 3  runners up.

The club was one of the first to be awarded the prestigious Football Association Charter Mark award at both Junior and Senior levels. This award was recognition of the Club’s commitment to providing football in a safe and positive environment for boys and girls within the local community.

We are also very proud  to be able to offer football for players with Disabilities and have done so  for 11 years, this see's players that  may not be able to either play or continue in mainstream football, get  a great opportunity to  just Play Football.

We have players that  are serving their 15th season with us, from small beginnings to now 4 Adult  squads, along with junior team players also, who all represent Swanscombe Tigers    FC in the Kent Disability League, the largest in the country. One of our squads were very proud to have gone through to 2nd round of The FA Peoples Cup in season 2015/16, check out the video on the right.

We were delighted to have  received this award and have since gone on to receive other Charter Standard awards including the highest award possible at our level the FA Charter Standard Community award and this will we hope really help us in achieving the Club’s ultimate aim of having it’s own base within the local area.

We are now looking to further strengthen our links within the local community and are also actively looking to set up our own girls and ladies sections.

Swanscombe and Greenhithe are proud of their independence but in recent years they have seen a real transformation with the development of Bluewater, the Ebbsfleet High Speed rail link as well as a number of housing developments the most recent of these being the Ebbsfleet Garden City which have all impacted on the community and environment now more than ever we are striving to meet the needs and aspirations of all the local people when it comes to sport.

This web site reflects the thriving community in Swanscombe and Greenhithe, as shown by a welcoming, successful, ambitious and locally rooted football club that is recognised as a major contributor to the attractiveness of the area. 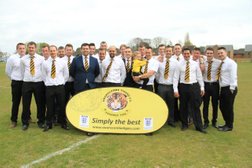 One of the largest Charter Standard Community Clubs in Kent, providing a fun and safe environment for players to enjoy the great sport of Football